Poems For Kids & Me 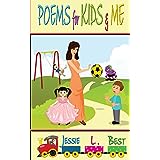 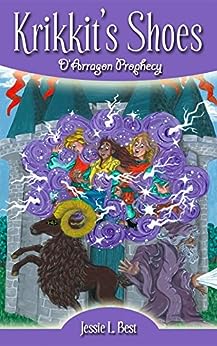 The magic continues for Krikkit, who is now 11 years old, in the form of a new pair of magical shoes which allow her to journey through the Land of Dreams.  Things, however are not the same this time. The Dream Caretaker, who guides and protects her, has been kidnapped. Krikkit is alone and lost. Encountering a magical elf, who wants to rescue her, she wonders if the enchanting creature is friend or foe. After all, we all know what elves are like! Stay tuned as another mystical adventure unfolds.

Magical fairy wands in the mystical receptacle are suddenly acting very strange indeed. Molly’s stunning red dragon is acting strange. Molly herself feels very strange. What is happening in the Spungle village where the young fairy discovered the powerful magic of the red stone. Will it still work in this new enchanting tale? Another exciting adventure unfolds as Molly strives to discover the source of the changes all around her.

Jaimie stumbled behind the old rum barrel, almost tripping in his attempt to hide. No way were those dirty old pirates going to get away with this. They had already captured his twin, Angus, but they weren’t going to get him. Peeping over the top of the barrel, eyes squinting against the brilliant sun, he searched for his brother.

“I have to find him!” Jaimie mumbled, not daring to raise his voice above a whisper.

Angus was excited from the moment the pirate ship sailed in to the cove where his family was camping. Rumours spread like wildfire in the nearby town tucked between the hills and the sea.  The pirates had treasure aboard.

“Gold coins! Spanish doubloons!“ Angus told him, his mischievous eyes sparkling with excitement.  Angus, red haired, freckled and the more adventurous twin, was determined to slip aboard the pirate ship and pocket a few of those coins. He watched the ship through his binoculars for days.

“You must be nuts!” exclaimed Jaimie. “Those derelicts will eat you alive for breakfast!”

However, Angus was not to be denied his treasure. “They probably stole it themselves, so why shouldn’t we have a share?”

Jaimie had tried his best to talk some sense into his brother with no success. He had followed Angus that morning and watched with fright when the old pirate with the greasy hair, his left eye covered with a bright blue patch, grabbed his twin as soon as he climbed aboard.

There was no sign of his troublesome brother and Jaimie decided to venture out of his hiding place. Tiptoeing out of the dark sanctuary, feet sliding on the wet deck, he searched. All was deathly quiet when he felt the hand grab his collar.

“Land of the setting sun, lookee here! Got meself another one!”

Flinching at the overwhelming stench that came from the toothless pirate, Jaimie feared he had met the same fate as Angus.

“What have you done with my brother?” Jaimie yelled, squirming in the pirate’s iron grasp.

“We are having him for breakfast,” the pirate informed him, his evil laugh echoing across the deck. “And you!”

Jaimie, his face burning from the heat of the sun, closed his eyes. This was scarier than he could ever have imagined. Struggling valiantly, he wished he had told someone where he was going. He continued to resist as he was dragged across the deck to an alcove.  His mouth gaped open as he saw Angus, hands tied and a gag across his mouth. He was stretched over a wooden rack. A table with sharp, scary looking knives stood nearby. “This can’t be happening!” he cried out in shock. “We’re supposed to go fishing today!”

Jaimie opened his eyes at last, brushing his hand across his hot face. Looking around, he discovered he was in his own bed, in his very own bedroom, rays from the sun creeping through the window and burning his face. He sat up. It had all been  a dream. There was Angus safe and sound in the bed across from him, fast asleep.

More relieved than he cared to admit, even to himself, Jaimie leaped out of bed. He stretched, his hands lifted to the sky. Chuckling to himself at his scary dream, he heard the clatter on the stone tiles and looked down. A shiny gold doubloon lay gleaming at his feet.

I had the wonderful opportunity to read Jessie L. Best’s newest middle-grade novel and became quickly enchanted with this delightful, adventure story for young readers and families! Molly’s magical efforts inside and outside her fairy realm, striving to save good from evil, led her through an intriguing and challenging journey. With the help of friends, family and an amazing red  dragon, Molly not only helps to eradicate the darkness, but she finds a part of herself that  she thought she had lost forever.

I loved this courageous, charming tale of magic and friendship and recommend it to passionate readers young and old of fantastical, moral quests. Will there be more magical Molly Spungle adventures in the future? I hope so!

Molly Spungle: The Secret of Red Stone is Jessie L. Best’s third book aimed at young readers and it follows the adventures of a young fairy named Molly Spungle, who escapes an evil sorcerer and must now rescue her friends.

Molly’s world is a magical place of potions, magic wands, good guys, bad guys, and a red dragon, Ran-Da, with exceptional powers-and a special connection to Molly. Young readers will learn about the importance of personal sacrifice for the greater good, the importance of friendships and the triumph of good over evil.

The device of the fairy has a long history in European culture, especially during the Victorian and Edwardian eras, where fairies (often  spelled faeries) figured in painting and literature. In Molly Spungle, we have an update on the fairy tales of the past. There are even overtones of L. Frank Baum’s Wizard of Oz.

Even without a sequel, the book can stand on its own. It’s a pretty tale told by an author with a vivid imagination.

Molly Spungle: Mystery of the Red Stone is finally finished! Will be out in approx. 2 weeks.

Revealing the cover today. Let me know what you think. I will be adding excerpts in the days to come so stay tuned!

Yes! Molly Spungle: The Secret of Red Stone is almost finished. Justice has been dealt to the evil sorcerer and he has had his final moments….or has he?  Wait a minute. That’s another book. Now on to the editing, formatting and designing a cover that depicts the story, it’s magic and it’s danger.

Look for the cover reveal in the following months.

Source: The Secret of Red Stone

A peek into the world of Molly Spungle! A works in progress for middle graders.

Molly Spungle is in a lot of trouble, her peaceful life destroyed by the wicked Jar-Ed, her beautiful wings broken, making escape from the dreaded Fielders Forest, impossible. Worse, there is not even  a fairy pot potion to be found in this strange place to heal her and enable her to help her friends who are about to be attacked by the evil sorcerer.

Molly meets a strange little man, half human, half hobgoblin, who has agreed to help her find her way. She discovers a ferocious looking red dragon, as well, whom she is hopeful might aid her. But what good is he, lying there unmoving, encased in the mysterious red stone?

Stay tuned for news as the plot develops and Molly is faced with more danger than she has ever known!

Something new going into the holiday season for my readers. Krikkit has undergone a few changes over the last few months. A new cover and an updated story line with the possibility of turning into a series for middle graders in the future. I loved the old cover but Krikkit insists on having something new! She feels it tells more about her adventure in D’Arragon. Drop me a line and let me know what you think. I would love to hear from you. Here is an excerpt from the updated version for you to enjoy and ponder over!

“Jara, head bent low, ran like the wind through the misty path that went on for miles through the Land of Dreams and Fables. Krikkit held on tightly to Jara’s thick mane.  Light glinted all around them as they passed in and out of dreams.

At times the sky grew dark with strange shaped faces staring at them. Sometimes it rained, accompanied by explosive bursts of lightning. Traveling through one dream, hungry wolves snarled at them viciously. Krikkit’s unstoppable screams flowed freely.”

jlbestblog
Create a free website or blog at WordPress.com.